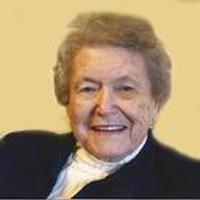 Ada was born October 26, 1926, in Morrison, a daughter to the late Victor F. and Edna Clara (Witthaus) Rippstein.

Ada was a 1945 graduate of Chamois High School and has been a lifelong resident of Osage County.

Ada was a homemaker and worked as a telephone operator for Southwestern Bell. In 1962, she went to work at the Missouri Division of Employment Security. She was employed there for 26 years until her retirement in 1988.

Ada enjoyed knitting, crocheting, baking, her computer and spending time with her grandchildren and great grandchildren.

In addition to her spouse and parents, Ada was preceded in death by one brother, Otto Rippstein.

Funeral Services will be at 10:00 a.m. on Saturday, September 15, 2012, at Morton Chapel in Linn with Fr. George Kramer officiating. Interment will follow at the Verdot Cemetery in Bonnots Mill.

To order memorial trees or send flowers to the family in memory of Ada V. Ocheskey, please visit our flower store.