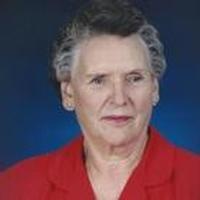 Agnes was born December 17, 1925, in Frankenstein, a daughter to the late Peter and Anna (Haslag) Troesser.

On November 12, 1946, she was united in marriage to Aloysius Dudenhoeffer in Frankenstein. He preceded her in death on November 10, 1996.

Agnes was a homemaker and a lifelong Frankenstein resident.

She was a member of Our Lady Help of Christians Catholic Church in Frankenstein, Ladies Sodality and the Quilting Circle.

Agnes enjoyed quilting, gardening, baking, making jellies and spending time with her family. She was a participant of the Miraculous Medal.

In addition to her spouse and parents, Agnes was preceded in death by: an infant daughter Ann and infant son Gerard; three brothers and seven sisters.

Mass of Christian Burial will be held at 10:00 a.m. on Wednesday, February 6, 2013, at Our Lady Help of Christians Catholic Church in Frankenstein with Fr. John Schmitz as the celebrant. Interment will follow in the Garden of Gethsemane Cemetery.

To order memorial trees or send flowers to the family in memory of Agnes Catherine Dudenhoeffer, please visit our flower store.