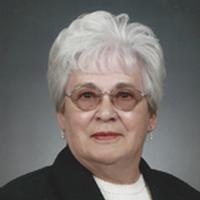 Aileen was born December 10, 1928, in Morrison, a daughter to the late Victor and Edna (Whertwine) Cramer.

Aileen was employed at the Linn Pants Factory. She was a member of St. John's United Methodist Church in Linn.

Aileen loved living on the farm, visiting with family and friends along with raising her son and grandson.

In addition to her parents and spouse of forty eight years, she was preceded in death by: two brothers, Roy and Marvin Cramer and two sisters, Marilyn Frederick and Beverly Cramer.

Funeral Service will be held at 12:00 p.m. on Saturday, January 17, 2015, at Morton Chapel in Linn with Rev. Floyd Gudde officiating. Interment with will follow in the Community of Christ Cemetery near Linn.

Expressions of sympathy may be made to St. John's United Methodist Church in Linn.

To order memorial trees or send flowers to the family in memory of Aileen M. Blackburn, please visit our flower store.