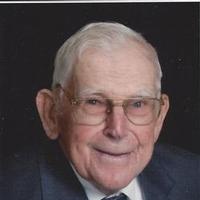 Albert Balkenbusch, age 95 of Linn, passed away peacefully on Saturday, January 7, 2017, at Westphalia Hills.
Albert was born September 6, 1921, in Osage County, Missouri, a son to the late John and Angela (Rehagen) Balkenbusch.
As a young boy, Albert attended school at St George Catholic School and Mt. Aerial School.
On October 30, 1945, he was united in marriage to Rosalie “Rose” Keilholz at Our Lady Help of Christians Catholic Church in Frankenstein. She survives of the home.
Albert owned and operated a land improvement contractor business for over 60 years.
Albert was a member of St. George Catholic Church where he served on the church building committee and the Parish Council. He was a member of the Knights of Columbus since 1955, the Osage County Farm Bureau for 68 years where he served as board president for several years, a MFA Board Member, and a Member of the Cattlemen’s Association. In 1967, Albert was named the Missouri Land Improvement Contractor of the Year by Midwest Contractors. He was also a member of the Missouri Land Improvement Contractors Association for over 70 years as well as serving on the Linn Technical College Industrial Advisory Boards for 5 years.
Albert enjoyed farming, hunting and he especially loved the time spent with his family and friends.
In addition to his spouse of 71 years, Albert is survived by: two sons, Kenny Balkenbusch and his wife Carol of Linn and Gary Balkenbusch and his wife Nancy of Ellisville; four daughters, Mary Joyce Stevenson and her husband Gary of Osage Beach, Lori Balkenbusch of St. Charles, Sharon O’Sullivan and her husband Michael of Jefferson City, and Lisa Tihen and her husband Scott of St. Peters; one sister, Betty Thoenen and her husband Phillip of Loose Creek; 12 grandchildren, Angie (Aaron) Riffel, Kimberly (Chris) Grega, Jeff (Janna) Balkenbusch, Dan (Hollie) Stevenson, Matt (Nicole) Balkenbusch, Anne (Dustin) Portell, Jake Balkenbusch, Katie Balkenbusch, Alex Tihen, Brandon O’Sullivan, Lauren Tihen and Lindsey O’Sullivan as well as 10 great grandchildren and one on the way as well as many nieces and nephews.
In addition to his parents, Albert was preceded in death by an infant daughter, Diana Balkenbusch and one sister Alice Voss.
Visitation will be held from 4:00 p.m. to 8:00 p.m. on Monday, January 9, 2017, at St. George Catholic Church in Linn A Rosary Service will begin at 8:00 p.m.
Mass of Christian Burial will be held at 10:30 a.m. on Tuesday, January 10, 2017, at St. George Catholic Church in Linn with Fr. Ed Schmidt and Fr. William Debo as Concelebrants. Interment will follow in St. George Parish Cemetery.
Expressions of sympathy may be made to St George Church Capital Campaign Fund

with Fr. Ed Schmidt and Fr. William Debo as the Concelebrants.

with Fr. Ed Schmidt and Fr. William Debo as the Concelebrants.

To order memorial trees or send flowers to the family in memory of Albert Balkenbusch, please visit our flower store.