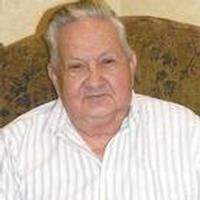 Albert "Bert" A. Fick, age 84, of Rich Fountain, passed away Saturday, January 26, 2013, at Westphalia Hills. Bert was born June 13, 1928, in Rich Fountain, a son to the late Alphonse and Louise (Boes) Fick. He was a 1946 graduate of Linn High School. Bert worked for Grellner Sales and Service in Rich Fountain for 52 years as a truck driver and manager. On November 18, 1950, he was united in marriage to Evelyn E. Edwards in Rich Fountain. Evelyn preceded him in death on June 23, 1999. Bert was a member of Sacred Heart Catholic Church in Rich Fountain, the Knights of Columbus, Western Catholic Union and American Legion Post 317 in Freeburg. He enjoyed trucking, fishing and spending time with his family especially his grandchildren. Survivors include: one son, Kenneth and his wife Christy Fick of Rich Fountain; one daughter, Jacqueline Fick Cleere and her husband James Cleere of Hopkinton, MA; three brothers, Al and his wife Ann Fick of Colorado Springs, CO; Larry and his wife Paulette Fick of Columbia; and Tom and his wife Carol Fick of Columbia; one sister, Dorothy Essig of Ballwin; three grandchildren, Derek, Jennifer and Erin Fick. In addition to his wife and parents, Bert was preceded in death by: two brothers, Ed and George Fick; one sister, Rosemary Fick; and his brother-in-law, John Essig. Visitation will be held from 4:00 p.m. to 7:00 p.m Tuesday, January 29, 2013 at Sacred Heart Catholic Church in Rich Fountain. A prayer service will be held at 7:00 p.m. Mass of Christian Burial will be at 10:00 a.m. Wednesday, January 30, 2013 at Sacred Heart Catholic Church with Fr. Phil Niekamp as the Celebrant. Interment will follow in the Sacred Heart Parish Cemetery. Expressions of sympathy may be made in care of the Sacred Heart School, Rich Fountain, MO.

To order memorial trees or send flowers to the family in memory of Albert A. Fick, please visit our flower store.