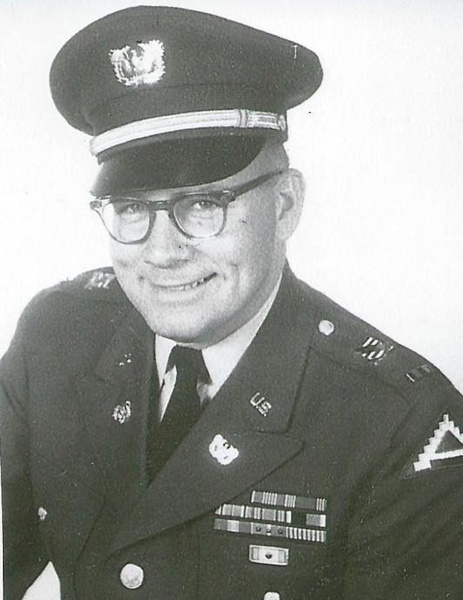 Albert was born July 6, 1927, in Moline, Illinois a son to the late Joseph and Aline (Davis) Hoste.

Albert earned his GED.  He served in the United States Army during WWII, Korea and Vietnam Wars.  He retired as a Chief Warrant Officer 3rd Class on July 31, 1969, after serving his country for 23 years.

On July 21, 1949, Albert was united in marriage to Frieda (Dengg) Hoste in Austria and she preceded him in death on August 2, 2003. He was then married on August 23, 2003 to Margaret (Jones) Hoste in Linn and she survives at their residence.

Albert was a member of St. John’s United Methodist Church in Linn, Linn VFW Post #4756, and the Westphalia American Legion.

In addition to his second spouse of 15 years, Albert is survived by: several step-children, several step-grandchildren, along with many nieces, nephews and friends.

In addition to his parents and first spouse of 54 years, he was preceded in death by several siblings.

Visitation will be held from 10:00 a.m. to 11:00 a.m. on Saturday, June 8, 2019, at Morton Chapel in Linn.  Funeral Service will follow at 11:00 a.m. with Rev. William Barkman officiating.  Interment with Full Military Honors will be held at Countryside Memorial Gardens near Owensville.

Expressions of sympathy may be made to Linn VFW Post #4756.

To order memorial trees or send flowers to the family in memory of Albert R. Hoste, please visit our flower store.