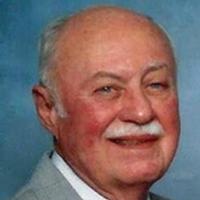 Al was a graduate of Beaumont High School in Texas and attended a year of college after high school.

In June of 1942, Al joined the United States Navy and served his country in World War II as a Motor Machinist Mate 1st Class. He was discharged from the Navy in February 1946. While serving in the Navy Al was a member of a navy band where he played standup bass.

On April 15, 1950, Al was united in marriage to Anna Marie Fick in St Louis. She survives in the home at Rich Fountain.

Al worked 33 years for Associated Rubber Products in St Louis as a plant manager before he and his family moved to Rich Fountain in 1990.

Al enjoyed hunting, fishing, horseshoes and playing golf. He loved to sing and while living in St Louis he sang with the Santa Cruz Chorale Club. He was a huge St. Louis Cardinal fan, he enjoyed gardening and Christmas was his favorite holiday. His greatest love, however, was the time spent with his grandchildren.

In addition to his wife of 65 years, Al is survived by: two sons, Tom Scherf of Loose Creek and Ed Scherf and his wife Gloria of Loose Creek; one daughter, Kathy Scherf of Rich Fountain; one sister, Dorothy Scanlon and her husband Robert of Florissant and three grandchildren, Abby Scherf, Lacy Scherf and Andy Scherf.

In addition to his parents, Al was preceded in death by two sisters, Mary Coffmann and Peggy O'Brien.

Mass of Christian Burial will be at 11:00 a.m. Thursday, January 15, 2015, at Sacred Heart Catholic Church with Fr. Augustine Okoli as the celebrant.

Interment with full Military Honors will be in the Sacred Heart Parish Cemetery.

To order memorial trees or send flowers to the family in memory of Albert "Al" L. Scherf, please visit our flower store.