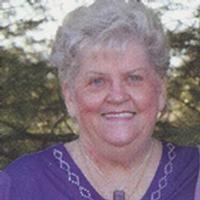 Alela I. Huesgen, age 77 of Frankenstein, passed away Thursday, September 15, 2016, at her residence.

Alela was born on September 14, 1939, in St. Louis, a daughter to the late Elzie Ernest and Lula Isabell (Flynn) Whiteside.

On June 13, 1959, she was united in marriage to John William "Jack" Huesgen in Wellston. He survives of the home.

Alela was a member of the Church of the Nazarene.

In addition to her parents she was preceded in death by: three sisters, Glenna Duvall, Beverly Mikel, and Juanita Whiteside; and one brother, George Henry Whiteside.

To order memorial trees or send flowers to the family in memory of Alela I Huesgen, please visit our flower store.