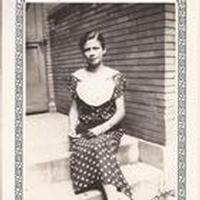 Alice was born April 11, 1914, in Morrison, a daughter to the late Gustav and Emelia (Brandt) Schaeperclaus. Alice attended the Rost School in Rural Morrison.

As a young adult, Alice was baptized and confirmed at St. James United Church of Christ in Morrison. Alice was a lifelong area resident and a homemaker. She was a past member of the Golden Crown Order of the Eastern Star #173 in Chamois.

In addition to her husband and parents, Alice was preceded in death by two sons; Rodney and Martin Carnes; a sister, Olga Schaeperclaus, four brothers, Alvin, Richard, Walter and Paul Schaeperclaus and one grandson, Phillip Carnes.

Graveside Service and interment will be held at 1:00 p.m. Thursday, July 25, 2013, at Deer Creek Cemetery in Chamois with the Rev. Frank Husted officiating

In Lieu of Flowers, Expressions of sympathy may be made to the Deer Creek Cemetery Fund.

To order memorial trees or send flowers to the family in memory of Alice Clara Carnes, please visit our flower store.