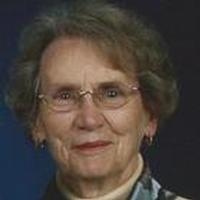 Alice was born April 21, 1925, in Rich Fountain, a daughter of the late Adolph and Emma (Porting) Ruettgers.

Alice was a Linn High School graduate and her work experience included a clerical position on the Island of Guam for the Army Corp of Engineers to being a tour guide at the Missouri State Capital.

Alice is survived by: one son, Christopher Lock of Loose Creek; three daughters, Teresa and her husband Arnold Rezac of Prairieville, LA, Julie Lock of Linn, and Emily and her husband Tim Aughtman of Loose Creek; one sister, Eleanor Ruettgers of Overland Park, KS; one sister-in-law, Angie Lock of Jefferson City; four grandchildren, Michael and Emily Rezac and Zachary and Mallory Aughtman as well as many nieces and nephews.

In addition to her husband and parents, she was preceded in death by: six sisters, Genevieve Eisterhold, Beatrice Connors, Henrietta Palmer, Rita Timmerberg, Irene Zeilmann, and Ida Schaefer; and one infant brother.

Expressions of sympathy may be made to Osage County Special Services.

To order memorial trees or send flowers to the family in memory of Alice R. Lock, please visit our flower store.