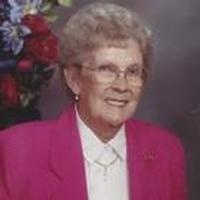 Alice was born October 6, 1925, in Linn, a daughter to the late John and Angela (Rehagen) Balkenbusch.

Alice was a 1944 graduate of Linn High School and lifelong area resident.

After high school, Alice taught at Mt. Ariel School for a year. She then went to work at the Osage County ASCS office as a clerk. She later worked as a switchboard operator at Linn Technical College and as a secretary and bookkeeper at St. George Parish until her retirement. Alice decided that retirement was not for her, so she took a job at the Osage County Country Club and found she truly enjoyed it so much that she continued the job for many years.

She enjoyed embroidery, gardening, raising strawberries, and taking care of her wildflowers and roses. Alice always said that "where roses grow, there is love growing too".

In addition to her parents and spouse of 52 years, she was preceded in death by two sons, Ron Voss and Terry Voss.

Mass of Christian Burial will be held at 11:00 a.m. on Thursday, May 29, 2014, at St. George Catholic Church in Linn with Fr. John Schmitz and Fr. I.C. Medina as Con-celebrants. Interment will follow in the St. George Parish Cemetery.

To order memorial trees or send flowers to the family in memory of Alice Marie Voss, please visit our flower store.