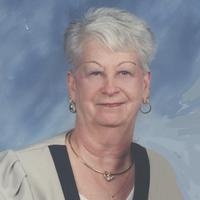 Alma was born on January 21, 1931, in Jamestown, a daughter to the late Edward and Lena (Dalsteim) Strein.

Alma was a 1951 graduate of Jamestown High School.

On August 8, 1980, she was united in marriage to Robert H. Temple. He preceded her in death.

Alma worked as a cosmetologist at Tolson Drug Store and Saffees in Jefferson City.

She enjoyed quilting, reading, listening to Billy Graham and cooking. Her specialty was German pot roast and homemade bread.

In addition to her parents and spouses, Alma was preceded in death by: a grandson, Bradley Birdsong and a brother, Edward Strein, Jr.

Mass of Christian Burial will be held at 11:00 a.m. on Wednesday, February 1, 2017, at Immaculate Conception Catholic Church in Loose Creek with Fr. Louis Nelen as the celebrant. Interment will be in Riverview Cemetery in Jefferson City.

Expressions of sympathy may be made to American Parkinson Disease Association.

To order memorial trees or send flowers to the family in memory of Alma Birdsong Boessen, please visit our flower store.