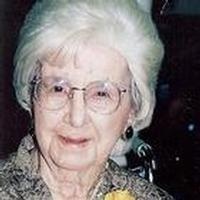 Alma J. Hamburg, age 98 of Linn, passed away Saturday, March 26, 2011, at Autumn Meadows Skilled Nursing Facility in Linn where she had been a resident for the past thirteen years.

Alma was born February 23, 1913, in Linn, a daughter to the late August W. and Regina Mary (Koenigsfeld) Franken.

She attended school at St. George in Linn.

Alma was a homemaker and a cook at St. George School. She enjoyed quilting, playing cards, tending her flowers and gardening.

In addition to her husband and parents, Alma was preceded in death by: one son, Elston Hamburg; two brothers, Vincent and Bernard Franken; one sister, Martha Otto; two infant sisters, Eleanor and Margaret; three half brothers, Victor Schaefer, Clarence Franken and Ray Franken; one half sister, Mary DeKayo and one son-in-law, David Kliethermes.

Mass of Christian Burial will be at 10:00 a.m. Tuesday, March 29, 2011, at the St George Catholic Church with Fr. I.C. Medina as the Celebrant. Interment will follow in the St. George Church Cemetery.

Expressions of sympathy may be made to Masses or St. George Church.

To order memorial trees or send flowers to the family in memory of Alma J. Hamburg, please visit our flower store.