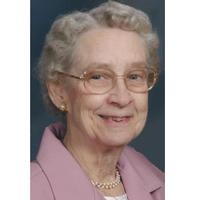 Anna Marie was born on October 23, 1934, in Glencoe, Missouri, a daughter to the late August and Caroline (Schaefer) Werner.
Anna Marie was a 1952 graduate of Fatima High School.
On June 2, 1956, she was united in marriage to Harry Ruettgers in St. Thomas, Missouri. He survives of the home.
In addition to being a homemaker, Anna Marie worked for the State of Missouri and Green Meadows Day Care.

In addition to her parents, Anna Marie was preceded in death by: her brother, Robert Werner; sister-in-law, Mae Ruettgers Boyd as well as two brothers-in-law, Peter Radmacher and Norman Boyd.

Interment will follow in the Immaculate Conception Parish Cemetery.

With Fr. Louis Nelen as the Celebrant

With Fr. Louis Nelen as the Celebrant

To order memorial trees or send flowers to the family in memory of Anna Marie Ruettgers, please visit our flower store.