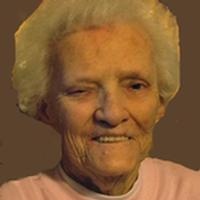 Beatrice was born April 3, 1925, in Princeton, Kansas, a daughter to the late Lawrence Edward and Pauline Christine (Phillips) Withers.

Beatrice was employed as a secretary at the Algoa Correctional Facility located in Jefferson City.

Beatrice was a member of Fairview Church of Christ. She enjoyed camping at the lake, playing cards, going on cruises, and visiting with her family.

In addition to her spouse and her parents, Beatrice is preceded in death by: one son, Jeremiah "Jerry" Hurley; three brothers, Richard, Larry and Leroy Withers; and one sister, Hazel Warren.

Expressions of sympathy may be made to Hospice Compassus, 600 Monroe Street, Suite 100, Jefferson City, MO 65101.

To order memorial trees or send flowers to the family in memory of Beatrice Inez Jones, please visit our flower store.