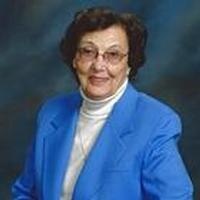 Bea was born October 31, 1921, in Loose Creek, a daughter to the late Paul Peter and Mary Christine (Muenks) Lock.

Bea was a 1940 graduate of Loose Creek High School and lifelong member of the Loose Creek Community.

On May 6, 1944, she was united in marriage to John L. Robertson in a double wedding ceremony at Immaculate Conception Catholic Church in Loose Creek which included Laurine Muenks and Lucian Bias. John preceded her in death on September 4, 2007.

Bea and her husband, John, owned and operated the Loose Creek Feed Company for many years. Bea was the bookkeeper for the business and a huge part of the companies' success.

Bea enjoyed gardening, going to grandchildren's ballgames, and was a huge fan of the St. Louis Cardinals. She also enjoyed traveling, mending clothes for the grandchildren and great grandchildren, and cooking all of the holiday meals. Bea made quilts each year for the Parish Picnic and each of her grandchildren received a quilt made personally by her.

In addition to her parents, and husband of 63 years, she was preceded in death by two sisters, Martha Henshaw and Marybelle Lock and a great granddaughter, Maggie Brandt.

Expressions of sympathy may be made to the Immaculate Conception School in Loose Creek.

To order memorial trees or send flowers to the family in memory of Beatrice H. Robertson, please visit our flower store.