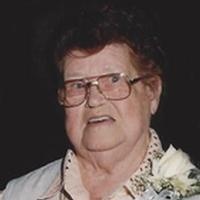 Bea was born October 13, 1915, in Fairland, OK, a daughter to the late Jacob and Gertrude (McGuire) White.

Bea worked for the pants factory in Linn and then worked for Shopsmith as a plastic mold operator. Later she was an assistant cook at the Linn Nutrition Center.

She was a member of Ryors Ebenezer United Church of Christ. Bea was a member of the Senior Center Band that went to different nursing homes in the area to play and sing. Bea played the piano, mandolin and the fiddle.

In addition to her parents and spouse of 33 years, Bea was preceded in death by a son, Randall Leon Tschappler and a brother, Theodore "Ted" White.

Private Graveside Services will be held at the Ryors Cemetery.

Expressions of sympathy may be made to SSM Hospice or the Ryors Cemetery Fund.

To order memorial trees or send flowers to the family in memory of Beatrice "Bea" Morine Tschappler, please visit our flower store.