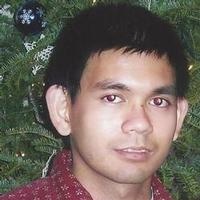 Benedict was born on January 14, 1984, in Manilla, Phillippines, a son to Anacleto Benito and Daisy (Gonzales) Benito. They both survive in Rolla.

Benedict was a 2002 graduate of Rolla High School where he was a member of the cross country and track teams. He attended Missouri S & T in Rolla where he was very active in the Newman Center singing and playing in their band Rainmakers. He was also a member of the Solar Car Team.

Benedict was united in marriage on November 20, 2010, at Sacred Heart Catholic Church in Salem to Trinity (Stephens) Benito. She survives in Salem.

In addition to his parents and spouse of six years, Benedict is survived by: one son, Joseph Benito and two daughters with one on the way, Helen, Meredith and baby Laura Benito, all of the home; two brothers, Stephen Benito and Denis Benito both of Rolla; maternal grandmother, Teodora Gonzales of North Hills, CA; paternal grandmother, Teresita Benito of Cypress, CA along with many uncles, aunts, family and friends.

He was preceded in death by one son, baby Jeremiah Benito, his grandfathers along with several aunts and uncles.

Mass of Christian Burial will be held at 10:00 a.m. on Friday, July 14, 2017, at Sacred Heart Catholic Church in Salem with Rev. John Sullivan and Rev. David Veit as concelebrates. Interment will follow at Bunker Cemetery in Bunker.

Expressions of sympathy may be made to the Family of Benedict Benito.

To order memorial trees or send flowers to the family in memory of Benedict Benito, please visit our flower store.