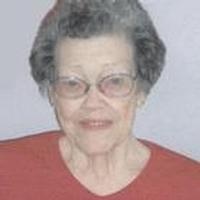 Bernie was born July 20, 1927, in Morrison, a daughter to the late Frank and Adelaide (Nolte) Schneider.

Bernie had worked at Chesebrough-Ponds and for an elementary school as a baker. She also did babysitting in addition to being a homemaker.

Bernie was a member of St George Catholic Church in Linn and enjoyed cooking, baking, crafts and gardening. She also enjoyed playing cards, fishing and spending time with her family. Her nieces and nephews enjoyed coming to her home for the good food and the laughs.

Bernie's survivors include: one grandson, Tylor Hackmann and his fiancAC. Erin Wiseman of Jefferson City, a sister-in-law, Henrietta Schneider of Hermann as well as numerous nieces and nephews.

In addition to her husband and parents, Bernie was preceded in death by two sons, Gregory A. Hackmann and Carl W. Hackmann; three brothers, Anthony, Clarence and Francis Schneider and two sisters, Mary Seifert and Rita Bock-Klick.

Mass of Christian Burial will be at 11:30 a.m. Wednesday at St George Catholic Church with Fr. I.C. Medina as the Celebrant. Interment will follow in the St George Parish Cemetery.

To order memorial trees or send flowers to the family in memory of Bernadette Catherine Hackmann, please visit our flower store.