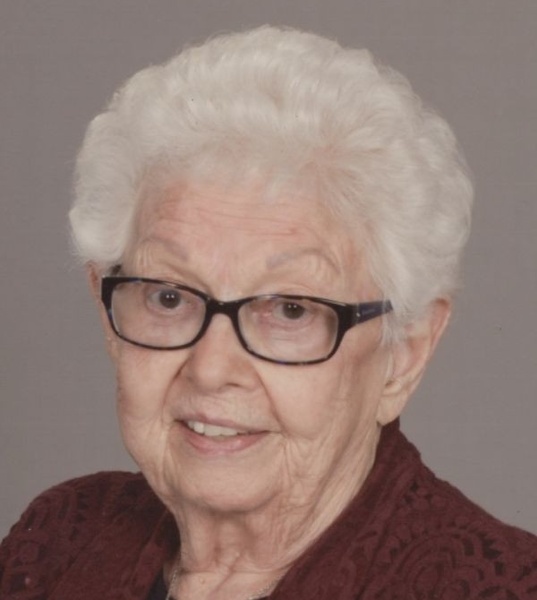 Bernadine “Bernie” Mantle-Mangels, age 93, of Linn, formerly of Barnett, passed away on Saturday, August 21, 2021, at Harbor Place near Linn.

Bernie was born on May 20, 1928, in Linn, a daughter to the late Bernard and Agnes (Thoenen) Voss.
Bernie was a 1946 graduate of Linn High School.
On September 14, 1946, she was united in marriage to Lawrence C. “Bruz” Mantle in St. Louis. Bruz preceded her in death on September 21, 1996. Then on December 8, 2001, she was united in marriage to Jerry A. Mangels at Sacred Heart Catholic Church in Eldon. Jerry preceded her in death on November 8, 2016.
Bernie was a waitress and then her and Bruz was the owner/operator of Larry’s Tavern in Linn for 23 years.
Bernie was a very devoted Catholic being a member of St. George Catholic Church in Linn, a former member of Sacred Heart Catholic Church in Eldon, the Linn VFW Ladies Auxiliary, Rocky Mount Lions Club and the Eagles Club in Jefferson City.
Bernie enjoyed crappie fishing, bowling, and going to ball games. She was an avid St. Louis Cardinals fan. She was known for her cherry cheesecakes, hot mustard, and she never met a stranger. Her greatest enjoyment was spending time with family and friends.
Bernie is survived by: three sons, Larry Mantle and his wife Sally of Sun City, Az., Donnie Mantle of Lake Ozark and friend Darla of Jefferson City, and Stanley Mantle and his wife Rhonda of Centertown, a daughter-in-law, Teri Mantle of the State of Illinois; 9 grandchildren Kari Abraham, Cheryl Reed, Michelle Abraham, Deanna Mantle-Price, Wesley Mantle, Mickey Mantle, Angie Kulman, Derrick Mantle, and Jason Mantle; 14 great grandchildren with two on the way; one great great grandchild along with one the way; three step children, Kenny Mangels and his wife Gayla of Eldon, Ron Mangels and his wife Barb of Lake Ozark, and Janet Cotton and her husband John of Russellville; 1 step grandson, Connor Mangels; two brothers, Bobby Voss and his wife Jean of Jefferson City and Roger Voss and his wife Agnes of Linn; one sister, Betsy Edwards of Jefferson City; and numerous nieces, nephews and an abundance of friends.
In addition to her parents and husbands, Bernie was preceded in death by: one son, Ronald Mantle, one brother, Wilbert Voss and six sisters, Mildred Sallin, Helen Owens, Jane Wilson, Esther Paschal, Margaret Ann Mantle and Mary Ruth Pointer.
Visitation will be held from 4:00 p.m. to 7:00 p.m. on Tuesday, August 24, 2021, at Morton Chapel in Linn
Mass of Christian Burial will be held at 11:00 a.m. on Wednesday, August 25, 2021, at St. George Catholic Church in Linn. Interment will be in the St. George Parish Cemetery.
Expressions of sympathy may be made to Sacred Heart Catholic Church in Eldon, St. George Catholic Church in Linn or Rocky Mount Lions Club.
Arrangements are under the direction of Morton Chapel, Linn, Missouri (897-2214) www.mortonchapel.com
To send flowers to the family or plant a tree in memory of Bernadine "Bernie" (Voss) Mantle-Mangels, please visit our floral store.

To order memorial trees or send flowers to the family in memory of Bernadine "Bernie" (Voss) Mantle-Mangels, please visit our flower store.