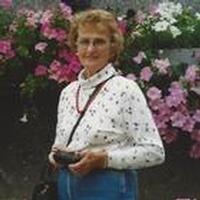 Bertha was born May 9, 1922, a daughter to the late Henry and Elizabeth (Strope) Frank.

Bertha worked for the Missouri Division of Employment Security. She was a member of Sacred Heart Catholic Church in Eldon, the Ladies Sodality, and she participated in the church's monthly Spring Again group. She was also a member of the Miller County VFW Post# 2442 Ladies Auxiliary,

In addition to her parents and husband, she was preceded in death by: one son, Gary Kixmiller; two daughters, Karen Starke and Marilyn Blackburn; one brother, Joseph Frank; one grandson, Aaron Kixmiller; two great great grandchildren, Sabrina and Catherine Thompson; and two son-in-laws, Martin Starke and Robert Oppermann.

Mass of Christian Burial will be at 10:00 a.m. on Saturday, January 18, 2014, at St. George Catholic Church with Fr. John Schmitz as the Celebrant. Interment will follow in the St. George Parish Cemetery.

To order memorial trees or send flowers to the family in memory of Bertha M. Kixmiller, please visit our flower store.