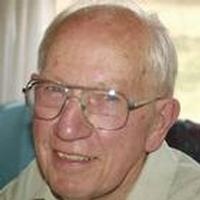 Bill Schaeperkoetter, 89 , of Mt. Sterling, Missouri, passed away Thursday, September 27, 2012, at University Hospital in Columbia.
Bill married the former Eloise Miller of Hope, Missouri, on April 19, 1947, at the Oklahoma Church of Christ near Hope in Osage County.
Bill was born on March 16, 1923, in the family home above Schaeperkoetter Store in Mt. Sterling, the son of the late Fred and Sylvia Opitz Schaeperkoetter. He attended school at Mt. Sterling School, the second of three Schaeperkoetter generations who completed their elementary education at the one-room school in Gasconade County. He graduated from Owensville High School in 1941, and served his country in World War II in the United States Army from 1942 to 1946. He was a mechanic with the rank of T-3 and served in the European theatre with the 973rd Engineer Maintenance Company. Bill was awarded two Bronze Stars for his service in the campaigns in Northern France and Rhineland in Germany after his arrival in Europe on June 7, 1944.
After returning from the war, Bill resumed his pre-war work in the family farm implement, truck and automobile business in Mt. Sterling, a career which spanned seven decades. He managed the business, which operated dealerships in Mt. Sterling, Hermann, and Owensville. He worked actively in the business daily until his death.
Bill was a charter member of the Community Christian Church at Linn. He served as an elder and treasurer of the congregation. Previously, he was also the long-term treasurer at Oklahoma Church of Christ. He was active in the Ozark Evangelistic Fellowship, which he also served as treasurer. He was a board member and President of the Mississippi Valley Farm Equipment Association, a group of farm implement dealers in the Missouri and Illinois area.
Bill loved giving his grandchildren tractor rides at family get-togethers, and all of his grandchildren and great-grandchildren were delighted to receive McDonald's gift certificates from "Papa" at Christmas. Bill was a master mechanic who retained an encyclopedic knowledge of Farmall tractors and International trucks acquired over a lifetime of work. He loved working word puzzles, looking at maps and atlases and working at the farm.
Bill is survived by his wife of over 65 years, Eloise; four children, Mark Schaeperkoetter and wife Judy of Owensville, Jeff Schaeperkoetter and wife Jane of Jefferson City, Brian Schaeperkoetter and wife Darla of Ellisville, and Julie Cartee and husband Bill of Vossem, Belgium; eleven grandchildren, Sarah Anderson (Tony), Amy Herman (Dale), Scott Schaeperkoetter (Bobbie), Seth Schaeperkoetter (Samantha), Matthew Schaeperkoetter (Carla), Emily Houk (Nathan), Megan Jahnsen (Brian), Amanda Cartee, Molly Steinbeck (Tyler), Billy Cartee (Catie), and Brett Schaeperkoetter, and two step-grandchildren, Laura and Meredith Purcell; 13 great-grandchildren and one step-great-grandchild; a brother, Ivan Schaeperkoetter and his wife, Ramona, of Owensville, and a sister, Vida Mehrhoff of Higginsville, and two sisters-in-law, Cecilia Schaeperkoetter of Salem, Illinois, and Jean Cull of Clinton; nieces, nephews and many friends. He was preceded in death by a daughter-in-law, Mary Huot Schaeperkoetter, and a brother, Raymond Schaeperkoetter.
Visitation will be at Community Christian Church east of Linn on Sunday, September 30, from 3 to 8 p.m. A celebration of Bill's life will be held Monday, October 1 at 10 a.m. at Community Christian Church. Burial will be at Oklahoma Church of Christ cemetery.
In lieu of flowers, donations are preferred to Community Christian Church Memorial Fund, 1598 Highway 50 East, Linn, Missouri.

To order memorial trees or send flowers to the family in memory of Bill Schaeperkoetter, please visit our flower store.