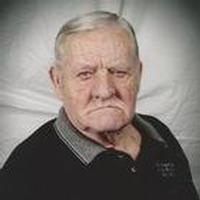 Billie attended school in Linn and lived all of his life in Osage County.

Billie was a World War II Navy Veteran serving on the USS Hoggatt Bay. Billie was later employed by Southwestern Bell in Linn where he worked as an installer repairman, retiring after 37 years of service.

Billie was a member of St. George Catholic Church in Linn and VFW Post 4756. He was very much the caretaker and the fixer. He loved his family and was always the pillar of strength for his wife, his children and his grandchildren.

For several years he lived at the river in Bonnots Mill. He loved it there. He enjoyed fishing, deer and squirrel hunting, gardening, playing bingo, visiting with neighbors, hosting fish fries at his pavilion and taking the grandkids with him to run trotlines. Many of his grandchildren were blessed to have spent a summer's week at the river with grandpa.

After his illness prevented him from enjoying the things he loved most, he spent many hours watching and cheering on the St. Louis Cardinals and thinking about his children, grandchildren and relatives. He once said, "I have a lot of time to think about everyone. I pray for them-a lot."

Mass of Christian Burial will be held at 10:00 a.m., Monday, June 25, 2012 at St. George Catholic Church in Linn with Fr. I.C. Medina as the Celebrant. Interment will follow in St. George Parish Cemetery with Full Military Honors.

Expressions of sympathy may be made to the National Parkinson's Foundation.

To order memorial trees or send flowers to the family in memory of Billie Dee Owens, please visit our flower store.