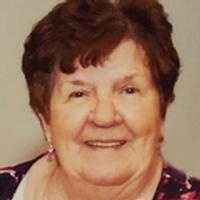 Bonnie "Grammie" Brandt, age 84 of Jefferson City, formerly of Linn, passed away on Wednesday, January 13, 2016, at Villa Marie Skilled Nursing Facility in Jefferson City surrounded by her family and grandchildren.

Bonnie was born January 11, 1932, in New Bloomfield, a daughter to the late Camile Adolph and Mary Mae (Crowe) Senevey.

Bonnie received her GED in 1990 along with her sister Peggy.

Bonnie was employed at Chesebrough-Pond's for over 30 years. She was a volunteer at Missouri River Regional Library and was a member of St. George Catholic Church in Linn.

Bonnie enjoyed dancing, watching Lawrence Welk, bowling, reading, playing on Facebook and eating donuts, especially from Schulte's, and her morning cup of coffee. She liked to watch TV shows like Columbo, the Love Boat, Wheel of Fortune, and old scary movies late at night. She was a great cook and her family loved her spaghetti and stuffed cabbage. However, her greatest joy was spending time with her family.

In addition to her parents and her spouse of 48 years, Bonnie was preceded in death by: four infant children, Sharon, Allen, Myra and Kelly; four brothers, Bill and Hugo Busen, and Paul and John Senevey;
four sisters, Virginia Bockover, Genevieve Schatz, Dorothy Biedron, and Louise Crowe.

Funeral Services will follow at 3:00 p.m. with Fr. Daniel Merz officiating. Inurnment will be held at the Linn Public Cemetery at a later date.

Expressions of sympathy may be made to the Special Learning Center in Jefferson City.

To order memorial trees or send flowers to the family in memory of Bonnie "Grammie" Brandt, please visit our flower store.