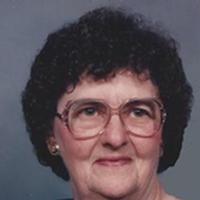 Catherine was born November 25, 1928 in Westphalia, a daughter to the late Charles Fritz and Mary (Meyerpeter) Falter.

Catherine attended the Winkleman School near Westphalia, a one room school house.

On August 22, 1959, she was united in marriage to Alphonse Brandt at St. Joseph's Catholic Church in Westphalia. He preceded her in death on May 5, 2002.

Catherine had been employed at St. Mary's Hospital and Linn Manufacturing. She was also a homemaker and helped raise hogs on the family farm.

She was a member of Our Lady Help of Christians Catholic Church in Frankenstein.

In addition to her parents and spouse of 43 years, she was preceded in death by: one son, James "Jim" Brandt; one daughter, Carla Brandt; two brothers, Charles and Bernard Falter; a sister, Gertrude Boeckmann; two brother-in-laws, Joe Boeckmann and Fred Bure; and two great granddaughters.

Mass of Christian Burial will be held at 11:00 a.m. on Friday, April 24, 2015, at Our Lady Help of Christians Catholic Church with Fr. Daniel Merz and Fr. Ed Schmidt as concelebrants. Interment will follow in Immaculate Conception Parish Cemetery in Loose Creek.

Expressions of sympathy may be made to Our Lady Help of Christian Catholic Church.

To order memorial trees or send flowers to the family in memory of Catherine E. Brandt, please visit our flower store.