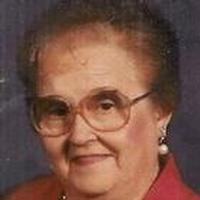 Catherine E. Schaefer, age 84, of Linn, passed away Wednesday, September 21, 2011, at Landmark Hospital in Columbia surrounded by her loving family.

Catherine was born April 24, 1927, in Frankenstein, a daughter to the late William and Martha (Maassen) Huesgen.

Catherine was a graduate of St. Mary's Catholic School in Frankenstein and also attended St. Mary's School of Nursing in Jefferson City.

On September 27, 1947, she was united in marriage to Nelson John Schaefer in Frankenstein.
He preceded her in death on April 17, 2009.

Catherine worked for number of years for Peoples Mutual Insurance Company as a secretary.

Catherine was a member of St. George Catholic Church, St. Ann's Sodality, and Ladies Auxiliary of VFW Post #4756. She and her husband were members of the Missouri Cattleman's Association and the American Angus Association.

Catherine enjoyed flowers, crafts, oil painting, and canning the fruits and vegetables that were grown on the family farm. She was known as a "peach merchant".

Survivors include: three sons, Gale Schaefer, Gary Schaefer and his wife Chris, and Gerard Schaefer all of Linn; one daughter, Kathy Cartwright and her husband Bill of Linn; one brother, Charles and his wife Velma Huesgen of Jefferson City; five sister-in-laws, Shirley Huesgen of Ballwin, Viola Schaefer of Union, Thelma Schaefer of Linn, Darlene Schaefer of Linn, and Catherine Perry of Jefferson City; as well as several nieces, nephews and friends.

In addition to her husband and parents, Catherine was preceded in death by one brother, Stanley Huesgen.

Mass of Christian Burial will be at 11:00 a.m. on Tuesday, September 27, 2011, at St. George Catholic Church in Linn with Fr. I.C. Medina as the Celebrant. Entombment will follow at Resurrection Mausoleum in Jefferson City.

Expressions of sympathy may be made to St. George Church.

To order memorial trees or send flowers to the family in memory of Catherine E. Schaefer, please visit our flower store.