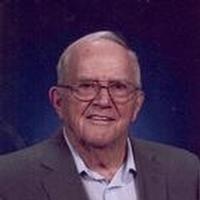 Clarence was born on October 13, 1919, in Loose Creek, a son to the late Charles and Mary (Backes) Haslag.

On April 30, 1955, he was united in marriage to Esther Bruemmer in Linn. She survives in Linn.

Prior to retirement, Clarence had been employed by Loose Creek Oil Company. He was a member of Immaculate Conception Catholic Church in Loose Creek.

In addition to his wife, Esther, Clarence is survived by: three sons, Dale and his wife Yvonne Haslag of Linn, Randy and his wife Regina Haslag of Taos, and Kevin and his wife Donna Haslag of Jefferson City; one daughter, Debra Franken and her husband Gary of Linn; three sisters, Margaret Schaefer of Linn, Frances Niekamp of Osage City, and Sister Alice Haslag OSSR of Liguori, MO; eleven grandchildren, twelve great grandchildren, and several nieces, nephews, cousins, and friends.

In addition to his parents, Clarence was preceded in death by two sisters, Annie Niekamp and Angie Eads and one infant brother, Alfred Haslag.

To order memorial trees or send flowers to the family in memory of Clarence A. Haslag, please visit our flower store.