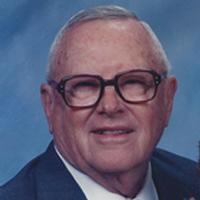 Clarence was a 1941 graduate of Herman High School.

On November 8, 1946, in Pensacola, Florida, Clarence married the love of his life, Loretta Margaret (Frey) Lalk, she survives in Morrison.

Clarence served his country honorably in the U.S. Navy for 20 years where he attained the rank of Chief Petty Office. He was a member of the world famous Hurricane Hunters, in which he flew into the eye of hurricanes a total of 28 times. After he retired from the Navy, Clarence went to work for the Civil Service for 16 years. When he retired from the Civil Service, Clarence and Loretta moved to Morrison, where they purchased his "little piece of Heaven". A 49 acre farm with a 5 acre pond where he could hunt or fish or enjoy sitting outside on the front porch.

He was a member of Zion-St. Peter Evangelical Church in Pershing for 34 years. Clarence was extremely proud that he and his two sons had over 50 years of service in the United States Navy.

In addition to his wife of 68 years, Clarence is survived by: one son, Ron Lalk and his wife Kate of Sparta, New Jersey; a daughter-in-law, Kristen Lalk of Marietta, Georgia and six grandchildren.

In addition to his parents, Clarence was preceded in death by one son, Senior Chief Danny Joe Lalk who retired from the Navy after 22 years of service.

A joint Memorial Service with Full Military Honors, for both father and son will be held at 2:00 p.m. on Sunday, September 6, 2015, at Zion-St. Peters Evangelical Church in Pershing, Mo.

Expressions of sympathy may be made to Zion-St. Peters Evangelical Church in Pershing.

Funeral arrangements are under the direction and care of Morton Chapel, Linn, Missouri (897-2214) www.mortonchapel.com

To order memorial trees or send flowers to the family in memory of Clarence L Lalk, please visit our flower store.