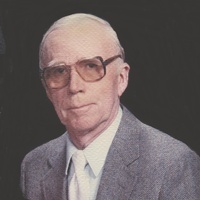 Clarence was born April 29, 1923, in Osage County, a son of the late Frank and Anna (Wingrath) Voss of Linn.

As a young boy, Clarence attended school at Linn graduating in 1941 and helped work on the family farm.

Clarence served his country being inducted into the United States Army on May 27, 1943 during World War II. He was a Medic in the 43rd division of the 126th General Hospital group in the Philippines. He received an Honorable Discharge on January 5, 1946.

After returning home from the war, Clarence went to work for the REA (Three Rivers Electric) located in Linn, where he spent nearly forty years. He was a lineman as well as a Forman until he retired at the age of 62 to care for his wife.

He enjoyed working in his large garden as well as hunting and fishing.

Clarence is survived by his son, David J. Voss of Houston, TX and several nieces and nephews.

In addition to his parents and spouse, Clarence was preceded in death by his sister, Alice Kliethermes.

Visitation will be held from 9:00 a.m. to 11:00 a.m. on Wednesday, August 2, 2017, at St. George Catholic Church in Linn. Mass of Christian Burial will follow at 11 a.m. with Fr. Philip Niekamp as the celebrant. Interment will be in the St. George Parish Cemetery with full military honors.

To order memorial trees or send flowers to the family in memory of Clarence L Voss, please visit our flower store.