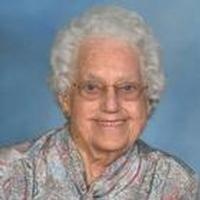 Cleo was born August 12, 1916, in Linn, a daughter to the late Edward J. and Polla E. (Regnier) Carey. After graduating high school, Cleo worked in a Linn defense factory during WWI. She was also a homemaker and caregiver for her aging parents. Cleo was a long time member of the Oklahoma Church of Christ. She enjoyed quilting, sewing, traveling and spending time with her family.

In 1997, Cleo moved to Texas to be closer to her son, Carey Aldred Holland and family.

In addition to her husband and parents, Cleo was preceded in death by a son and daughter-in-law, Carey and Shirley Holland; two sisters, Jessie Senevey and Elma Holland; one brother; Enos Carey and one grandson, Lance Holland.

Graveside Services will be held at 11:00 a.m. on Friday, March 2, 2012, at Oklahoma Church of Christ with Pastor Mark Gregor officiating.

Expressions of sympathy may be made to Oklahoma Church of Christ.

To order memorial trees or send flowers to the family in memory of Cleo Golden Holland, please visit our flower store.