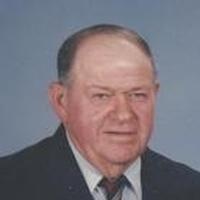 Cletus was born May 17, 1929, in Loose Creek a son to the late Henry and Pauline (Schmitz) Rustemeyer.

Cletus was a 1948 graduate of Immaculate Conception School in Loose Creek. He was a U.S. Army Veteran serving during the Korean War.

Cletus worked as a turkey farmer and raised turkeys for Cargill Corporation.

Cletus was a member of Immaculate Conception Catholic Church in Loose Creek, The Holy Name Society and VFW Post #4756 in Linn.

He enjoyed fishing, bowling and spending time with his family.

In addition to his parents, he was preceded in death by: his twin brother, Clem Rustemeyer and his brother, Ferdinand Rustemeyer and one brother-in-law, Francis Stegeman.

Expressions of sympathy may be made to Immaculate Conception Catholic Church or School.

To order memorial trees or send flowers to the family in memory of Cletus P. Rustemeyer, please visit our flower store.