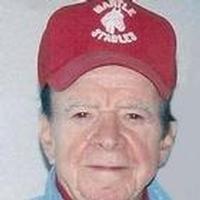 Clifford was born October 9, 1919, in Voshall, a son to the late James Rhey and Mary Ada (Gilbert) Mantle.

Clifford worked as a manager at the Fox Theatre in St. Louis, Sales Manager for a Dodge Dealership and Osage Vans and owner of the Old Voss Saloon in Bonnots Mill.

In 1987, Clifford moved back to Linn from St. Louis. He was a Charter member of Osage County Trail Riders and enjoyed farming, race horses, raising border collies and game birds, gardening, and most importantly, entertaining and spending time with family and friends.

In addition to his parents, Clifford was preceded in death by: two brothers, Larry (Bruz) Mantle and B.A. Mantle; two sisters, Ragine Hubach and Betty Mantle; a sister-in-law, Billie Mantle; and one granddaughter, Alexandra Parker.

Funeral Services will follow at 2:00 p.m. on Sunday, February 19, 2012, at Morton Chapel in Linn. Interment will follow in the Linn Memorial Park Cemetery.

In lieu of flowers, expressions of sympathy may be made to Kenneth Kirchner State School, 1403 Riverside Drive, Jefferson City, MO 65101.

To order memorial trees or send flowers to the family in memory of Clifford M. Mantle, please visit our flower store.