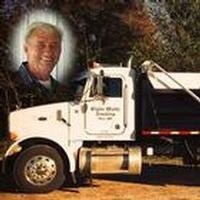 Clyde was a 1964 graduate of Linn High School.

On November 26, 1966, he was united in marriage to Barbara Hartge at the St. James United Church of Christ in Morrison. She survives of the home.

Clyde was a member of the Linn Masonic Lodge. He enjoyed going to the casinos, auctions, and spending his mornings drinking coffee with friends. He especially enjoyed attending his grandchildren's sporting events.

In addition to his spouse of 47 years, Clyde is survived by: one son, Darren Wolfe and his wife Kelli of Loose Creek; one daughter, Lonnie Berhorst and her husband Ron of Westphalia; one brother, Clifford Wolfe and his wife Mary Ann of Loose Creek; two sisters, Geraldine Schreiman and her husband Don of Jefferson City, and Margaret "Tootie" Abbott and her husband Ray of Jefferson City; one brother-in-law, Bernard Hartge and his wife Saundra of Morrison; five grandchildren, Brittany (Nathan) Huhn, Brooke Berhorst, Zach Buscher, Tyler Wolfe, and Courtney Wolfe as well as several nieces, nephews and friends from everywhere.

Funeral Services will be held at 1:00 p.m. on Wednesday, November 5, 2014, at Morton Chapel with Rev. Barb Zastrow officiating. Interment will follow in the Lane Cemetery near Linn.

Expressions of sympathy may be made to the Lane Cemetery or to the MS Foundation.

To order memorial trees or send flowers to the family in memory of Clyde F. Wolfe, please visit our flower store.