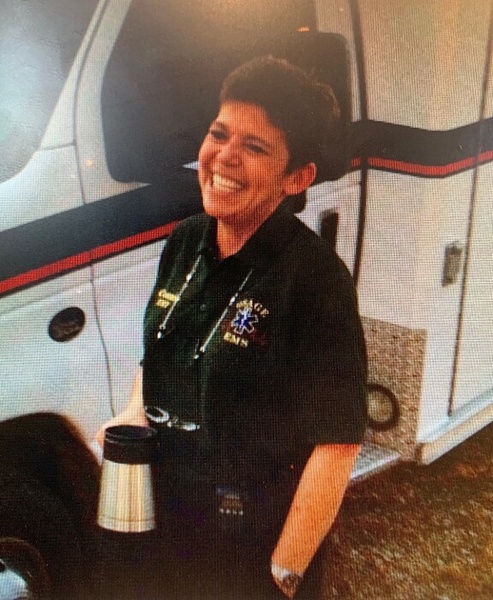 Connie Jo Thoenen, age 59 of Linn, passed away Thursday, September 3, 2020, at her residence surrounded by her loving family.

Connie was born September 17, 1960, in Jefferson City, a daughter to the late Jerry Fowler and Marilyn “Mitzi” (Schmitz) Fowler who survives in Linn.

She was a 1979 graduate of Linn High School.  Connie served her country in the United States Air Force and National Guard from 1979 to 2002.

Connie was employed at St. Mary’s Hospital, National Guard from where she retired in 2002, and was currently employed with Osage County Ambulance District.

She was a member of Community Christian Church where she was active in bible study and a member of Paul Hasenbeck American Legion Post #317 in Freeburg.

Connie enjoyed quilting, knitting, woodworking, going to the casino, fishing, and working on crafts.  She was a talented teacher and enjoyed watching people succeed. She also enjoyed hiding and scaring people.  She loved having people over to visit but enjoyed her quiet time as well.  But most of all, she loved spending time with her family and friends.

In addition to her mother and husband of 30 years, Connie is survived by: one son, Sam Thoenen and his wife Kassie of Linn; two daughters, Christy Muehlhausen and best friend, Derek Kemp of Linn and Amy Keilholz and her husband Nick of Chamois; ten grandchildren, Aubrey, Dylan, Carson, Charlotte, Isaiah, Devon, Marilyn, James, Harley, and Raylynn; one brother, Johnny Fowler and his wife Susie of Linn; two sisters, Debbie Keilholz and her husband Harold “Sneak” of Chamois and Jeri Ann Rackers and her husband Tim of Linn; mother-in-law, Mary Lou Thoenen of Linn; two sisters-in-law, Cindy Stegeman of Loose Creek and Wanda Fowler and her husband Carl of Linn; one brother-in-law, Wayne Thoenen and his special friend Sarah Strope; her beloved pet, Thelma; along with many nieces, nephews, and a host of friends.

Visitation will be held from 10:00 a.m. to 1:00 p.m. on Monday, September 7, 2020, at Community Christian Church in Linn.  Funeral services will follow at 1:00 p.m. with A.J. Probst officiating.  Full military honors and active duty EMS honors will be conducted following the funeral service.

In lieu of flowers, expressions of sympathy may be made to the Community Christian Church.

To order memorial trees or send flowers to the family in memory of Connie Jo Thoenen, please visit our flower store.