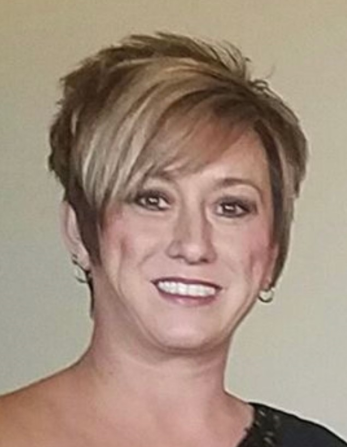 Deanna was born November 1, 1973, in Mexico, Missouri, a daughter to James and Linda (Bruemmer) Kempker of Centralia.

Deanna was a 1992 graduate of Centralia High School.  She was also a graduate of Nichols Career Center in Jefferson City with a degree in Dental Assistance and was a Smile Consultant. After she left the Dentistry field, she enjoyed being a stay-at-home mom.

On July 16, 2011, she was united in marriage to Randy Wilbers at Lake Tahoe, California.  He survives of the home.

She was known as “Momma D” by all the children either at her house or at the school where she volunteered.  Deanna was an avid supporter of her children’s sporting activities, never missing a game.  She was a Kansas City Chiefs football fan, she loved being outdoors, enjoyed gardening, canning and cooking. However, her greatest joy came from spending time with her family.

Mass of Christian Burial will be held at 11:00 a.m. on Saturday, November 16, 2019, at St. Francis Xavier Catholic Church with Fr. Michael W. Penn as the celebrant.  Interment will follow in the St. Francis Xavier Parish Cemetery.

Expressions of sympathy may be made to Connor and Browdy Wilbers Education Fund.

To order memorial trees or send flowers to the family in memory of Deanna Kempker Wilbers, please visit our flower store.
Send a Sympathy Card