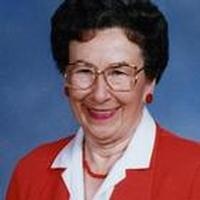 Dollie worked at the International Shoe Factory which later became Florsheim Shoe Factory in Hermann from June 9, 1941 until February 3, 1944, when she married Sam Ulrich. She was a homemaker until she returned to work at the Shoe Factory on April 17, 1950 and she continued to work there until November 18, 1982.

Dollie was a member of Ryors Ebenezer United Church of Christ. She enjoyed playing pinnacle, bingo and dominos, and visiting with family and friends.

Dollie is survived by: a step daughter, JoAnn Triplett and her husband Bob of Webster Groves; a step granddaughter, Debra Triplett Foersterling and her husband Mark of St. Louis; two step great granddaughters, Stacy and Lauren Foersterling of St. Louis; two step grandsons, Bruce and and Doug Keller; a niece, Cindy Heseman of Linn and several nieces and nephews.

A Memorial Service will be held at 3:00 p.m. on Sunday, June 15, 2014, at Ryors Ebenezer United Church of Christ near Linn with Rev. Barb Zastrow officiating.

Expressions of sympathy may be made to the Katie Heseman Memorial Scholarship Fund, Owensville High School.

To order memorial trees or send flowers to the family in memory of Dollie E. (Kiderlen) Busch, please visit our flower store.