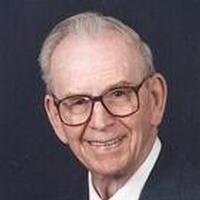 Donald was born September 4, 1918, a son to the late Alvah and Ina (Collier) Townley.

Donald was a graduate of Chamois High School and served in the US Army from 1941-1946 where he spent six months in North Africa and two years in Italy.
On August 4, 1948, Donald was united in marriage to Evelyn O. Paulsmeyer of Chamois. They celebrated their 63rd wedding anniversary this year. She survives at Garden Terrace Care Center in Overland Park, KS.

Donald had a BS in Civil Engineering and a MS in Sanitary Engineering from the University of Missouri. He was employed by the Missouri Division of Health and Missouri State Highway Department from 1949-1960. He retired in 1977 from the US Public Health Services.

Donald was a long-time member of the First Presbyterian Church of Liberty and an Elder. He was a Free Mason and a member of other Masonic bodies including the Eastern Star, York Rite Bodies, Scottish Rite and Shrine.

In addition to his wife, Donald is survived by one son Alan Townley and his wife Teri of Overland Park, KS; one daughter Ann Mehr and her husband David of Columbia, MO, one brother Kenneth Townley of Jefferson City, MO, and one sister, Ruth Anderson of Glenmont, NY, and four grandchildren. In addition to his parents Donald was preceded in death by his brother Bill Townley.

To order memorial trees or send flowers to the family in memory of Donald Armstrong Townley, please visit our flower store.