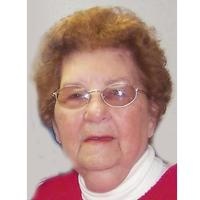 Doris was born on March 18, 1925, in Ardmore, Missouri, a daughter to the late, John David and Eula (Haney) Dille

Doris was a 1943 graduate of Macon High School.

Doris moved to Chamois in 1962 and was a member of Maranatha Baptist Church.

Doris was a homemaker and loved to cook. Her greatest joy was spending time with her family and friends. She loved visiting with people and her door was always open to them.

In addition to her parents and her spouse of 65 years, Doris was preceded in death by: one son, Eric Greer; a great grandchild, Anthony Jordon Sieg, six brothers and four sisters.

Funeral Services will be held at 10:00 a.m. on Wednesday, April 6, 2016, at the Maranatha Baptist Church in Chamois with Rev. Leo Roberson officiating. Interment will follow at 2:00 p.m. Wednesday in the Jacksonville Missouri Veterans Cemetery.

Expressions of sympathy may be made to Honor Flight.

To order memorial trees or send flowers to the family in memory of Doris LaVaughn Greer, please visit our flower store.