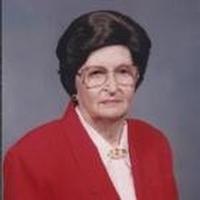 Dorothy was born March 22, 1922, in Linn, a daughter to the late John and Pauline (Sallin) Schlangenstein.

Dorothy worked as a housekeeper in Jefferson City during her early years and became a homemaker after her children were born. She later worked as a cook at various restaurants in Linn, including Al's CafAC., Commercial CafAC. and Cedar Grove. She retired in 1987 after working for 16 years as a cashier at Linn State Technical College.

Dorothy enjoyed watching TV, reading the paper, playing bingo and getting outdoors at every opportunity with her best friend, Janet Haslag. Most importantly, she enjoyed spending time with her family and she looked forward to their visits and the meals she shared with them.

In addition to her husband and parents, Dorothy was preceded in death by her three sisters, Genevieve Amos, Mildred Brandt and Pearline Wilbers and her brother Ray Schlangenstein.

Mass of Christian Burial will be held at 11:00 a.m. on Saturday, January 4, 2014, at St George Catholic Church in Linn with Fr. John Schmitz as the Celebrant. Interment will follow in the St. George Parish Cemetery.

Expressions of sympathy may be made to St George Catholic Church.

To order memorial trees or send flowers to the family in memory of Dorothy Jean Boes, please visit our flower store.