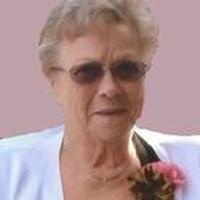 Dorothy Mae Nichols Hausmann, age 83 of Linn, began her journey to join the love of her life, Walter, on February 15, 2014, at Westphalia Hills.

Dorothy was born September 27, 1930, in Chamois, a daughter to the late Joseph and Ella (Wolf) Nichols.

On January 5, 1950, she was united in marriage to Walter A. Hausmann in Chamois. They lived for twelve years in Hermann until Missouri Power and Light transferred Walter to Linn. He preceded her in death on May 8, 1995.

Dorothy worked at the Linn Pants Manufacturing Company for a few years. She then babysat children, especially great nieces and nephews. When the grandchildren came along, she totally dedicated her babysitting time to them. She canned and preserved all summer long from the big gardens Walter grew while sharing with family and friends. Dorothy also spent many, many hours going with Walter as he searched for coon dogs and team mules/horses or at the sale barn on Friday or Saturday nights. Dorothy and Walter loved to dance and took their young family dancing almost every Saturday night. Dorothy spent her life seeing to the needs of others. "Grandma/Grandma Dorcey/Gammer" cherished her children, grandchildren and especially her great-grandchildren.

Dorothy was a dedicated member of the Osage Trail Riders for over 20 years. After losing her husband Walter, Dorothy started her out of state travels with Roger and Terri. This later lead to her beloved Arkansas trips with Debra and Donna. She loved to just get in the car and go for a ride and finding those great "ole farm" barns was a real treat. Dorothy enjoyed many homemade meals and BBQ's at Linda's home.

Mass of Christian Burial will be held at 11:00 a.m. on Wednesday, February 19, 2014, at St. George Catholic Church in Linn with Rev. I.C. Medina and Rev. John Schmitz as the celebrants. Interment will follow in the St. George Parish Cemetery.

Expressions of sympathy may be made to St. Jude's Children's Hospital or the Arthritis Foundation.

To order memorial trees or send flowers to the family in memory of Dorothy Mae Hausmann, please visit our flower store.