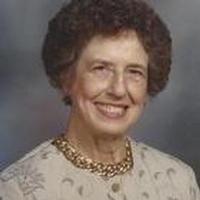 Dorothy was born May 5, 1926, in Osage County, a daughter to the late John and Margaret (Brandt) Stieferman.

Dorothy lived in Washington D.C. for about 20 years where she worked as a waitress. While living there she was a member of St. Matthews Cathedral and she served as an usher. Dorothy was very devoted to the Blessed Virgin and she helped conduct Our Lady of Fatima First Saturday devotions for many years while living in Washington. She also did volunteer work for one of the many homeless shelters there.

Dorothy was a member of St. George Catholic Church in Linn, the Ladies Sodality, the Catholic Knights and VFW Post 4756 Ladies Auxiliary.

She enjoyed fishing with Fred, shopping, sewing and cooking, even though she always felt her sisters could out cook her. She and Fred enjoyed dancing and delivering meals on wheels to the elderly in Linn. She also enjoyed making rosaries for the missions.

In addition to her husbands and parents, Dorothy was preceded in death by: four brothers, Melvin, Clement, Alfred and Bernard Stieferman; two sisters, Mildred Russert and Catherine Stieferman.

Mass of Christian Burial will be held at 11:00 a.m. on Monday, December 23, 2013, at St. George Catholic Church in Linn with Fr. John Schmitz as the Celebrant. Interment will follow in the St. George Parish Cemetery.

Expressions of sympathy may be made to St. George Catholic Church or the Alzheimer's Association.

To order memorial trees or send flowers to the family in memory of Dorothy Christine Neuner, please visit our flower store.