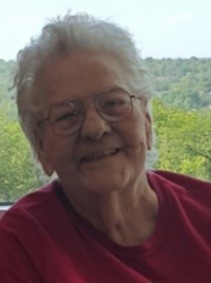 Dorothy was born on April 10, 1929, in St. Charles, a daughter to the late George and Irene (Moseley) Walker.

She was employed Schleutler Manufacturing in Linn.

Dorothy a member of First Baptist Church in Chamois and the St. Louis Rod and Gun Club.

Dorothy enjoyed the OATS bus trips, playing bingo, going to rummage sales, watching “odd” videos with her granddaughter, joking around with people, working with Harold on old cars, she loved grilled cheese sandwiches, and was very proud of her grandchildren.

In addition to her parents, Dorothy was preceded in death by a son-in-law, Marvin Miller Jr.; a sister, Beulah Onger; a sister-in-law, Marilyn Walker, and a brother-in-law, Roy Onger

In lieu of flowers, expressions of sympathy may be made Deer Creek Cemetery.

Arrangements are under the direction of Morton Chapel, Chamois, Missouri (763-5522)

To order memorial trees or send flowers to the family in memory of Dorothy Irene Rudd, please visit our flower store.