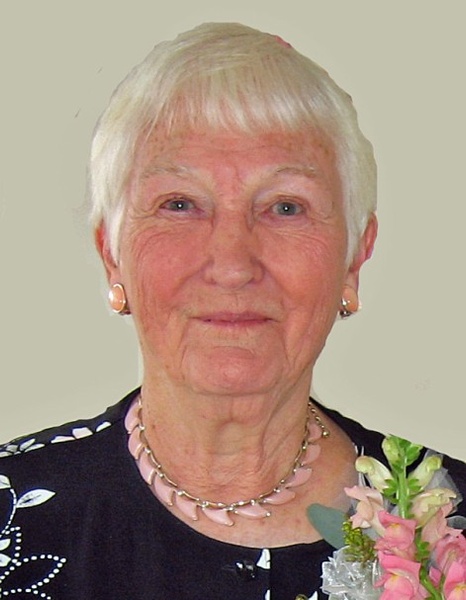 Edna Jean Starr, age 91 of Linn, passed away peacefully at home on Saturday, October 14, 2017. A nearly lifelong resident of Linn, she was supported in her final months on earth by a devoted family and the many friends who visited, called or wrote. Edna counted each friend as a blessing in her life.

Edna was born November 18, 1925, a daughter to the late Allan Augustus Curtiss and Eulalia Jane (Haines) Curtiss near Koeltztown, Missouri.

She graduated from Linn High School in 1942 and studied business at the University of Missouri in Columbia.

On January 1, 1946, she married Harold Russell Starr. He preceded her in death in April of 2001. The couple made their home in Linn and subsequently had 4 children, Carol, Russell, Daryl and Jim. In addition to being a wife and mother, Edna was employed by the People’s Mutual Insurance Company and, with her husband, owned and operated the Home Furnishing Company in Linn from 1948 until 1977. The couple also farmed at Ashland, Missouri. In 1968, she became the manager of the student facilities for the newly formed Linn Technical College now Missouri State Technical College in Linn. She retired in 1987. Students through the years appreciated her friendly manner, hard work on their behalf, and genuine interest in their lives.

Edna was active in community affairs. She was a lifelong member of St. John’s United Methodist Church in Linn where she served as treasurer from 2001 until 2017. She was a member, officer and district officer of the Methodist Women’s Organization. She sang in the church choir, taught Sunday School and contributed to most church functions and projects. She was a strong and active supporter of the Linn Public School System. Edna was instrumental in initiating the first kindergarten in Linn. Edna also volunteered at the Good Shepard Food Pantry and served on the Public Cemetery Board for many years, finally stepping down at age 90.

Edna loved to cook and was appreciated by family for the excellent meals she consistently produced. She also loved to garden and with her husband grew most of the vegetables she served while also canning for the winter. Neighbors and friends also benefitted by the abundance produced in the Starr gardens. Edna was also known for her baked goods. New neighbors, old friends, people in need and those needing a “thank you” were often surprised by the gift of a delicious cinnamon twist for which Edna was known.

In addition to her parents and her husband of 55 years, Edna was preceded in death by her only sibling, a brother, Allan Jr. killed in WWII; and a son, Daryl, who died at the age of 7.

Funeral Services will be held at 10:00 a.m. on Wednesday, October 18, 2017 at St. John’s United Methodist Church in Linn with Rev. Floyd Gudde officiating. Interment will follow in the Linn Public Cemetery.

In lieu of flowers the family suggests contributions to St. John’s United Methodist Church in Linn, the Good Shepherd Food Pantry or the Linn Public Cemetery.

To order memorial trees or send flowers to the family in memory of Edna Jean Starr, please visit our flower store.