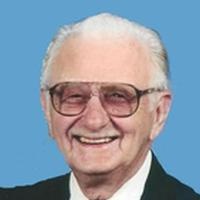 Ed was born July 11, 1921, the oldest of three children of John and Theresa (Koerber) Brune. He was preceded in death by his parents, his beloved wife of 69 years, Luella (Brandt) Brune, and his brother-in-law, Clarence V. Mueller.

After growing up on his family's farm, Ed went to St. Louis to find work and there met the love of his life, Luella. They were married in St. Louis on October 10, 1940. During WW II Ed started training as a pilot in the United States Army Air Corps, but because the war was coming to an end, he finished his tour of duty stateside.

Ed loved music and both played in a band and taught guitar. He worked as a cost estimator for military jet planes for McDonnell Douglas Aircraft and retired in 1984 to Rich Fountain, where both he and Luella had grown up. They traveled extensively and enjoyed being with family, fishing and gardening, but always found time to be active in their parish. Ed was on the Sacred Heart Church redecorating committee, gave church tours and was one of the Grand Marshals in the Sacred Heart 175th Anniversary parade. He also gave talks to the parish school children about WW II and military airplanes.

Mass of Christian Burial will be held at 11:00 a.m. on Thursday, October 6, 2016, at Sacred Heart Catholic Church with Fr. William Debo, Fr. Philip Niekamp, and Fr. Augustine Okoli as concelebrants. Interment will follow in the Sacred Heart Parish Cemetery with full Military Honors.

Expressions of sympathy may be made for Masses or to Hospice Compassus.

The family wishes to express its gratitude for the wonderful support and generous service of the Sacred Heart Church and school communities, the staff of St. Joseph's Bluffs and the staff of Hospice Compassus, wonderful neighbors and friends.

To order memorial trees or send flowers to the family in memory of Edward "Ed" Peter Brune, please visit our flower store.