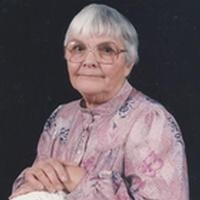 Ella Mae Wilson was born in Holland, MO on June 8th 1926. She passed away in Owensville, MO on April 4, 2015. Ella was the eldest child of Calvin Alfred Edwards and Eva Sarah Smith Edwards. On February 7, 1945 she married Leon Mason in Pemiscot County, MO. She later divorced and then married Erby Ulysses Wilson on August 21, 1947 in Mississippi County, AR.

Ella and Erby moved to Orosi, CA in 1957. He eventually took over his parent's lawn gardening business. They served the Orosi, Sultana, and Dinuba communities with their lawn gardening services until 1969. Then in 1981 they moved to AR. Due to Erby's failing health, they moved to Olivehurst, CA in 1984. During this time they worked side by side as they raised their children and at times some of their grandchildren. They dedicated their life to raising their children and to their work. Later in their life they both dedicated their life to God and attended church on a regular basis.

Erby Wilson passed away in 1990 and Ella lived alone until 2009 when she moved back to her home state, MO. She was diagnosed with Alzheimer's in 2007 and soon required 24 hour care. Realizing she needed full time medical care she was placed in Autumn Meadows' Alzheimer's Unit in Linn, MO. In 2014 she was moved to Frene Valley Healthcare Center in Owensville, MO where her daughter was employed.

Interment will follow in the Smith Mountain Cemetery in Dinuba.

Expressions of sympathy may be made to: The Family of Ella Mae Wilson.

Arrangements are under the direction of Morton Chapel in Linn, Missouri and Dopkins Funeral Chapel in Dinuba, California.

Condolences may be shared with the family at www.mortonchapel.com

To order memorial trees or send flowers to the family in memory of Ella Mae Wilson, please visit our flower store.