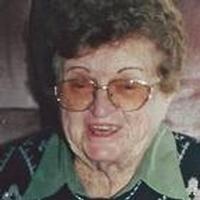 Elnora was born September 3, 1913, in Luystown, a daughter to the late Henry and Josephine (Lock) Gelven.

Elnora was a lifelong area resident and had worked at Linn Manufacturing and at Chesebrough-Pond's as well as being a homemaker.

Elnora loved to fish. It had been said of her that no matter how big or small the fish was she never threw any of them back. She also enjoyed gardening, canning and spending time with her family.

In addition to her husband of 57 years and her parents, Elnora was preceded in death by two brother and two sisters.

Interment will follow in the Perrey-St. Isidore Cemetery near Linn.

Expressions of sympathy may be made to the Perrey-St. Isidore Cemetery Fund.

To order memorial trees or send flowers to the family in memory of Elnora H Baclesse, please visit our flower store.