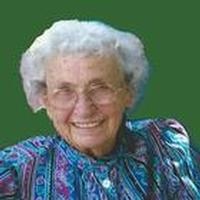 Elsie was born December 29, 1921, in Hope, a daughter of the late William Carl and Mary (Hemeyer) Ruegge.

Elsie was a lifelong area resident and attended school in Hope.

On September 15, 1956, she was united in marriage to Raymond Uthe at the Salem Presbyterian Church in Hope. He survives at the home.

She enjoyed quilting, playing pinochle, her flower and vegetable gardens, cooking, canning and spending time with her family.

In addition to her parents, Elsie was preceded in death by: one son, Russell Uthe and three sisters, Minnie Schollmeyer, Helen Wulff, and Stella Ruegge.

An additional visitation will be held from 11:00 a.m. until the time of service at 1:00 p.m. on Saturday, May 4, 2013 at the Bethel Salem Presbyterian Church in Hope with the Rev. Bob Bailey officiating. Interment will follow in the Bethel Salem Church Cemetery.

Expressions of sympathy may be made to Hope Salem Cemetery Association.

To order memorial trees or send flowers to the family in memory of Elsie Alma Uthe, please visit our flower store.