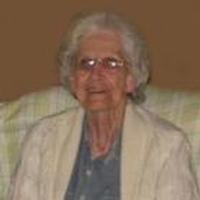 Esther was born March 10, 1923, in Linn, a daughter to the late Anton and Mary (Rehagen) Rustemeyer.

As a child, Esther attended the Lone Star School near Linn.

Esther was a member of St. George Catholic Church, St Ann's Sodality and the Osage County Historical Society. She enjoyed gardening and flowers and counted cross stitch. She also loved the outdoor and spending time with her grandchildren.

In addition to her husband and parents, Esther was preceded in death by: two brothers, Joseph and Leo Rustemeyer, and two sisters, Elsie Neier and Rosemary Rustemeyer.

Mass of Christian Burial will be held at 1:00 p.m. on Monday, February 6, 2012, at St. George Catholic Church in Linn with Fr. I.C. Medina as the Celebrant. Interment will follow in the St. George Parish Cemetery.

Expressions of sympathy may be made to the Kidney Foundation, Alzheimer's Association, or St. George Church.

To order memorial trees or send flowers to the family in memory of Esther Wilma Reinkemeyer, please visit our flower store.