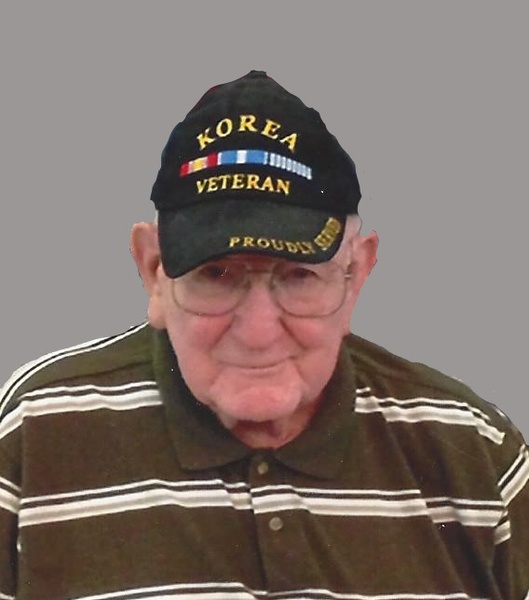 Gene was born on February 14, 1932, in Chamois, a son to the late John William and Mary Pearl (Stock) Kiso.   Gene was baptized and became a member of the Oklahoma Church of Christ and attended grade school at Hope.

Gene worked for the Hope Mill making telephone brackets and for Langenberg Mining Company from 1948 to 1950 when he went to Iowa to work on a dairy farm until he was drafted into the United States Army.  He served in the Korean War from October 1952 to October 1954.  He was a forward observer for the 2nd division 105th artillery for eleven months and was on the 38th parallel when the cease fire was declared.  On July 27, 1953 the armistice was signed at Panmunjom though not by the South Koreans, because it left the country divided by the 38th Parallel.

Gene returned to his parent’s home in Hope after the war where he worked for his brother-in-law, Bill Branson, in the trucking business.

Gene was united in marriage to Joan McDonald on December 15, 1956 at Bethany Lutheran Church in St Louis, Missouri.   Gene and Joan lived in Jennings, St. Louis County until 1961.  He worked at Wermke Spring Company.

In the fall of 1961, Gene purchased the Branson Trucking business at Hope, and hauled livestock to East St. Louis and returning with farm supplies.  The family lived first above the Hope Store.  In 1964, they moved to the Bill Miller place on the creek at Hope, using the blacksmith shop for holding farm supplies, feed, and fertilizer.  Gene enjoyed his dogs, coon hunting, frog gigging, fishing and gardening.

In 1972, Gene quit trucking for himself and worked for Bockting Farm Equipment for several years.  He later worked for Westinghouse in Jefferson City and continued farming, too.

Gene retired from Westinghouse in 1987 and in 1991 they moved to the home on the Kiso farm and continued raising cattle until January 2003. Gene spent the last few years in and out of General Baptist Nursing Home in Linn, where he made many friends.

Eugene enjoyed an honor trip with Central Missouri Honor Flight #20 in September 2012, to see the Korean Memorial, Arlington Cemetery to see changing of the guards, and many other honors given to our Veterans.

Gene is survived by his wife, Joan, of 63 years and three children, Michael and his wife Tami of Osage Bend, Terry and his friend Renee Christian of Taos, Julie Koenigsfeld and her husband Doug of Jefferson City, Barb Kiso, former daughter-in-law;  five grandchildren, Jason and his wife Khera of Tebbetts, Brandon and his wife Helen of Selinsgrove, PA; Alicia Jurd and her husband David of Loose Creek; Amanda Kiso of St Louis,  Joe Christian and his wife Courtney of Jefferson City; six great-grandchildren, Jaxson and Kolton Kiso, Kaylee and Macy Jurd, Solana Kiso and Bennett Christian; two sisters, Geraldine Branson of Linn and Lila Brinkmann of Morrison,  three sisters-in-law, Bonnie Kiso of Jefferson City,  Carol McDonald of Wentzville and June McDonald of Chesterfield;  three cousins, Shirley Hern of Anaheim, CA., Delores Tindle of Jefferson City and Marsha Shasserre of Chamois along with several nieces and nephews.

Expressions of sympathy may be made to Oklahoma Church Cemetery Fund or Central Missouri Honor Flight.

To order memorial trees or send flowers to the family in memory of Eugene "Gene" Earl Kiso, please visit our flower store.