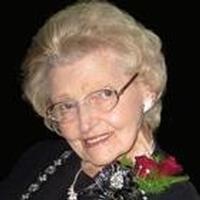 Evelyn was born on August 7, 1926, in Westphalia, the daughter of the late Theodore and Elizabeth (Mengwasser) Luecke. She was married on February 15, 1950, at St. Joseph Catholic Church in Westphalia, to Hubert John Neuner, who preceded her in death on February 27, 1996.

Evelyn attended Winkelman School and St. Joseph School in Westphalia. She was a homemaker who was devoted to her family and her faith. She believed in the power of prayer and had the utmost trust in the Lord. She was a faithful member of Sacred Heart Catholic Church in Rich Fountain, the St. Ann's Sodality, Western Catholic Union and was a member of the Linn Knights of Columbus Ladies Auxiliary.

Her 13 children were her pride and joy. She loved music and played the piano. She also loved to cook and was always baking, with her specialty being cheesecakes and cookies.

Mass of Christian Burial will be Wednesday, June 19, 2013, at 11:00 a.m. at Sacred Heart Church with the Rev. Philip Niekamp as the Celebrant.

Interment will be in the Sacred Heart Cemetery.

To order memorial trees or send flowers to the family in memory of Evelyn Thresia Neuner, please visit our flower store.